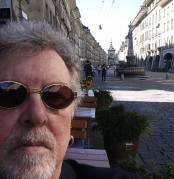 As with music, he began creating art at a very early age. He has drawn and painted since childhood; began making collage in the 1960s; taught himself photography: from camera basics to darkroom techniques, and printing. Preferring vintage film and Polaroid cameras to digital, he often utilizes both in his photo work. His artwork has been exhibited in galleries and museums in Louisiana and Europe in one man and/or group shows. He is a member of the 10/20/40 Art Group [along with: Lynda Benglis, Enoch Doyle Jeter, and Sarah Davidson]. A native of Louisiana; a long time resident of New Orleans/Monroe; he has resided and worked between Louisiana and Europe for the past 20 years.

“In my drawings, I am heavily influenced by my Louisiana culture, heritage, traditions, every day life and scenery; especially New Orleans, the French Quarter, Mardi Gras, Bourbon Street, Halloween, the Day of the Dead, festivals, religious and voodoo imagery, southern funkiness, etc. Having also lived in Europe for 20+ years, I am also influenced by the street scenes, bar, cabaret, and cafe scenes, as well as landscapes and their carnivals and different cultures.”